Moissanite ~ What is it & why you should seriously consider it 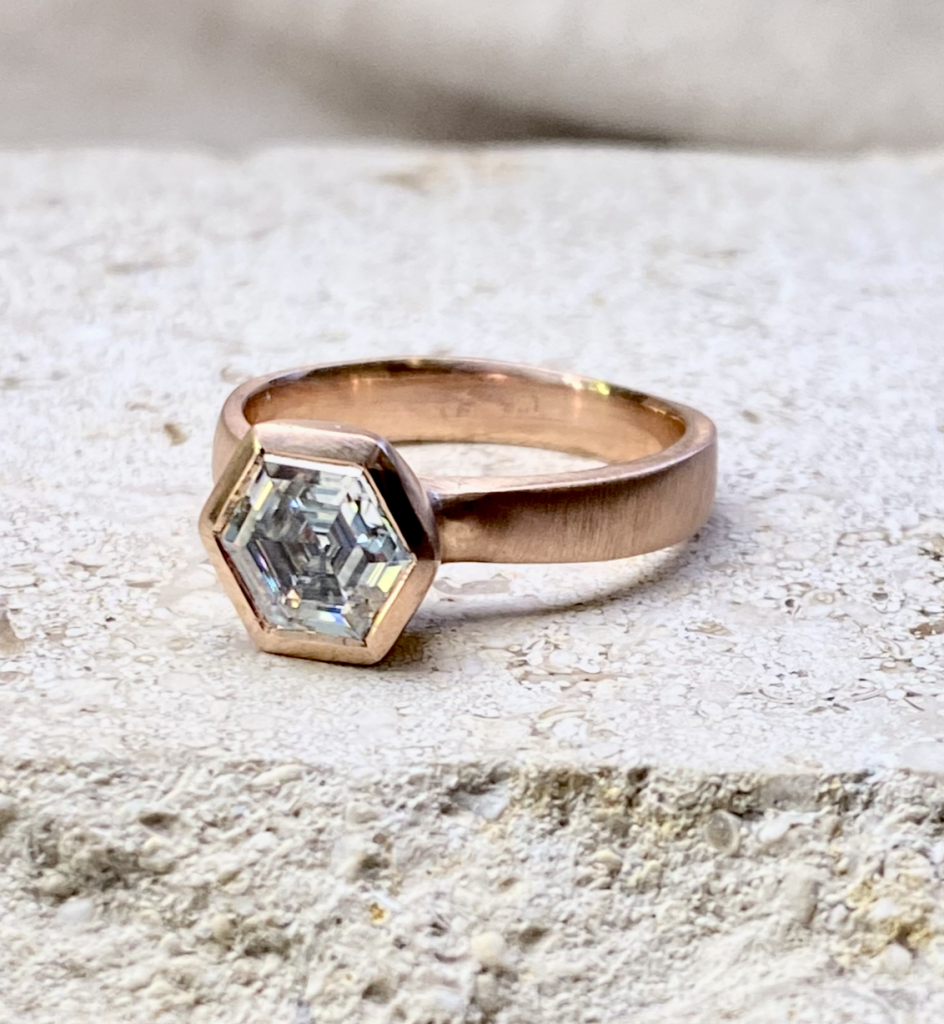 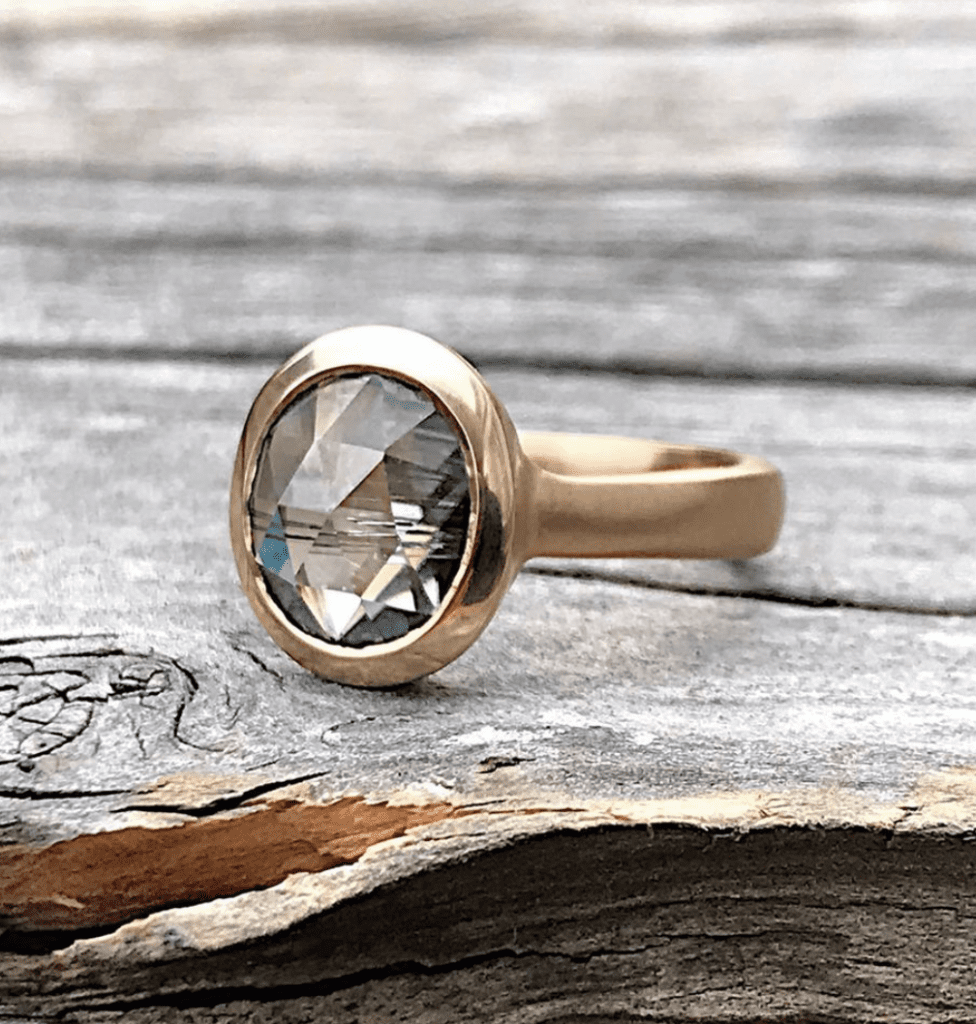 “Moissanite isn’t a fake diamond, it is its own gem and chemical composition,” Cubic zirconia may be a better-known  ( very cheap and a little nasty ) diamond alternative, but it doesn’t have the same unique qualities as moissanite. ”

For the longest time, there was no good alternative to diamonds.

Stones like CZ become cloudy over time, have a not-so diamond-like blueish undertone, don’t sparkle like a diamond, and are not hard enough to wear daily to hold up over a lifetime.

Moissanite however is extremely hard wearing, near impossible to chip never clouds or loses its sparkle, and thanks to the innovation of facet patterns, it looks identical to a diamond.

They say that moissanite is a gemstone born from the stars. It was discovered in 1893 by French scientist Henri Moissan inside a meteorite crater in Arizona. He thought he’d just found a diamond and after studying it in a lab, Moissan found out it was silicon carbide, which he named moissanite.

Where Moissanite Comes From

In recent years some quantities were found in Israel; however, mined moissanite isn’t suitable to be used in jewellery. So this gem is lab-grown these days, which makes it environmentally friendly and conflict-free as well. Many appreciate and choose socially-responsible jewellery, which provides assurance and guarantees like moissanite.

Growing moissanite in a laboratory isn’t easy or straightforward either. Only a very few companies in the world can create this complex process of growing moissanite gems. It is certainly a mix of science and art!

This makes moissanite rarer than diamonds.

While moissanite looks and behaves like a famous diamond, not many know it is more brilliant than a diamond. That’s because moissanite reflects more light. This clever gem can also stay brilliant for longer as its surface attracts less grime and dirt than a diamond. So it sparkles for much longer between cleans.

It is made to be worn every day no matter what conditions, as it’s very durable and scratch and heat-resistant. So it’s needless to say that it delights its owner for a lifetime. Moissanite is harder than rubies and sapphires with the Mohs hardness scale rating of 9.25. Being heat-resistant brings a massive advantage to moissanite, and this is why:

● This gem can be cast in place more precisely, which produces exact-fit designs.
● Repairing your moissanite jewellery is easy and will not damage the jewels.
● Gems can survive extreme temperatures like fire.

You’d think that something rarer and more brilliant than a diamond will be expensive, but the answer is no. Moissanites are generally lower in price than diamonds, so it’s very affordable. Jewellery with moissanite allows its owner the option of choosing a gem size they truly desire.

For those wanting a near-colourless stone, a moissanite is a great option – colourless moissanite is the equivalent of the MOST EXPENSIVE and rare diamond colour grading D-E.

Coloured moissanite has a lesser price point and comes in blues, greens, greys, yellow, pink and shades of champagne.

Moissanite is an Ethical Choice Compared to Many Diamonds

The diamond industry has very questionable ethics even today ( Goggle De Beers “diamond cartel ” and you can read all about the many unethical practises the industry turns a blind eye to).

There are many jewellery companies that use the phrase ” ethical mined” or ” sustainably mined” or some other catchphrase. And whilst I too use mined gems from only ethical suppliers  – at the end of the day, these are  STILL MINED!

Not only that hazardous chemicals used to extract and process the gemstones can leak into the environment, harming local human populations- did you know it can take many tonnes of precious water to mine a single sapphire?

By far the worst example is Myanmar who supplies many of the world’s rubies, sapphire, jade, garnet, lapis lazuli and moonstones, among others, in fact, 80% of the worlds rubies come from Myanmar. Funds from these mining industries are partly controlled by and distributed to the country’s military, who are still carrying out ethnic cleansing of the Rohingya. While the situation is complex, (we also need political intervention and systemic change so that small miners don’t lose their livelihoods with no support as collateral damage) purchasing any of these stones means that you run a high chance of funding genocide.

By choosing moissanite you can be assured it’s created in an ethical and sustainable way – plus you get the “diamond” look for a fraction of the diamond price and the feel-good factor it’s sustainable with a far smaller footprint than that mined diamond you may be considering.